The atmosphere in Beijing has changed noticeably in recent months; and many liberal-minded people here now fear that the government of Xi Jinping has made a sharp turn towards authoritarianism.

As nearly three thousand Communist Party delegates gather in the capital for the National People’s Congress, this is clearly a critical time for China’s economy.

The rate of growth is down yet again, and although that by itself doesn’t necessarily make the Chinese government unhappy, it does mean a greater possibility of a so-called hard landing for the economy, with worrying effects on people’s jobs and their standard of living.

The American ratings agency Moody’s has cut its outlook for China from “stable” to “negative”.

“If anything, I’d say that 2016 is the most critical year for the Chinese economy in the past decade or so.”

If things turn out awkwardly here, there’s always the possible danger of social unrest: the one thing any Chinese government dreads.

And so President Xi Jinping is pulling up the drawbridge.

Two weeks ago he made his new approach unmistakably clear. On a single day, he visited the main Communist Party newspaper, the state news agency, and state television.

In each place he told the staff they must be absolutely loyal to the Communist Party and follow its leadership in thought, politics and action.

At CCTV the staff welcomed him with a banner which read “Central Television’s family name is The Party”. And, not by coincidence, he told them: “The media run by the Party and the government… must have the Party as their family name.”

What he is demanding from the state broadcaster, the main newspaper, and the national news agency is nothing short of total loyalty to the Party line, and to his own leadership.

A leading pro-government academic, Wang Yukai, who teaches at a top school for Party officials insists that this view is mistaken.

“Seen from the outside, it might look as though our top leadership has become more aggressive. However, this aggressiveness won’t last long.”

“In order to solve the current economic and social problems that China faces now, these strong measures are understandable.”

“China needs a stronger government in order to govern our country and society effectively.” 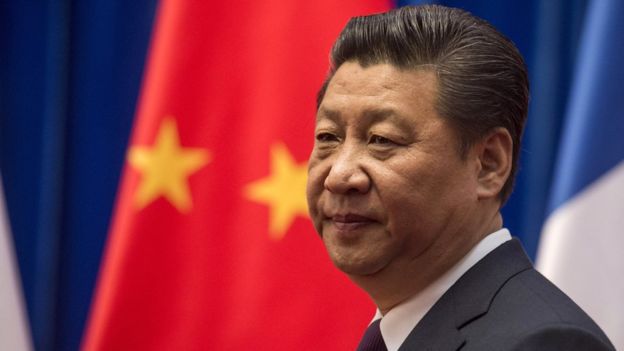 Others see the new hint of authoritarianism as a sign that the top leadership is feeling decidedly vulnerable. Zhang Lifan, an outspoken independent historian, thinks Mr Xi feels a crisis is approaching.

“For those reasons, he must hold on to his power tightly. He’s like a man who doesn’t know how to swim. He is going to grab hold of whatever he can.”

In the new climate, these might be difficult opinions to voice. Does Mr Zhang feel nervous?

“The fact that I can still talk is quite an exception. I don’t know for how much longer, though.”

President Xi has some important advantages. He is unquestionably popular. People associate him with China’s economic success and with its impressive new standing in the world, and they’re proud of what has been achieved.

He has cleaned out any potential opposition in the armed forces. The anti-corruption campaign, which is also hugely popular, has enabled him to get rid of many of his political opponents in the upper ranks of the Communist Party.

Even so, he still seems remarkably thin-skinned. The case of the five Hong Kong booksellers, who vanished in October after they had stocked books purporting to give details of the private lives and power struggles of China’s political elite, is particularly disturbing.

In spite of the supposedly separate status of Hong Kong, four of the booksellers have appeared on television in mainland China and “confessed” to various crimes in grovelling terms, in a way which is unpleasantly reminiscent of the Cultural Revolution.

One is a Swedish citizen. The other was British, though he claims he has now renounced his British nationality.

Britain has protested that this is a clear breach of the “One country, two systems” agreement under which Hong Kong was handed back to China in 1997.

But the Chinese government has noted with considerable satisfaction that Britain’s response was noticeably more muted than that of the United States. The new, closer relationship between China and Britain seems to be paying off – for China.

Senior government and Party figures insist that China won’t move away from the path of greater democracy for long.

But the sense of nervousness among better-off people here is growing.

Many wealthy Chinese are getting their money out of the country, and they’re sending their children to school and university in Western countries, particularly Britain and the United States.

They hope the latest crack-down won’t last. But they aren’t taking any chances.

Worry about war with North Korea

Great powers stepping up on China

Why one writer is fighting to call China’s Communist Party to...

Steve Bannon: Australia is on ‘frontlines’ of economic war with China

China’s 40 years of economic reform that opened the country up...