“Forex reserves are valuable assets that [China] can use at critical times. It’s a pity that they are being sold heavily in the market. It should be the last resort.”

It is commonly accepted that a country’s foreign reserves represent its national savings. You accept this, don’t you?

Very well, then here are three questions for you:

Question 1: If you borrow $100 from the bank and put it directly back on deposit with the bank, have your savings really grown by $100?

Question 2: Do you really think it is any different if a country borrows money from its banks and then puts it back on deposit?

Question 3: Assuming you have properly answered the first two questions with the words, “of course not”, do you still believe that a country’s foreign reserves must represent its national savings?

We shall assume that Primary One did not constitute the two most difficult years of your life. Thus here is an example of a country that has the world’s largest foreign reserves but no real savings in them at all. You guessed it. This country is China. 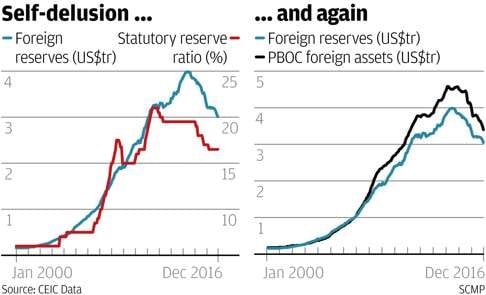 The first chart tells the basic story. The blue line represents China’s foreign reserves and the red line the percentage statutory reserve requirement imposed on the country’s banks. There is a reason that the trends match.

Statutory reserves are supposed to be a tool of monetary control, but in China’s case they are a tool for extorting money from banks to buy up huge foreign currency inflows.

These flowed in as a result of a huge trade surplus that in turn resulted from huge manipulation of the yuan’s foreign exchange rate.

So what we have here is Beijing borrowing yuan from its banks (taking it actually; the banks have no choice in the matter), exchanging it for US dollars and then putting these dollars back on deposit as foreign reserves.

And people call this savings? We could all be trillionaires that way and yet have no savings at all. Just create one long daisy chain of trillion-dollar borrowings and subsequent deposits and we are all there, Bob’s your uncle.

But it gets worse than that. For a long period, China was accumulating these foreign reserves while allowing the yuan to strengthen against the dollar.

It thus had weak dollar assets to pay off strong currency liabilities in yuan, and the inevitable result was a growing, but unreported, hole in its balance sheet.

It was unreported because the People’s Bank of China carried those foreign assets at their cost instead of their market value.

The second chart sets things straight. At their height, the unreported currency translation loss was about US$760 billion, a mere 1,100 times the PBOC’s own capital.

Yes, let your jaw drop. It is not so bad any longer, now that they yuan has weakened, but that loss from which the PBOC averts its eyes still amounts to more than US$300 billion.

We in Hong Kong do have real savings in our foreign reserves. The accumulated fiscal surpluses of our government and their investment profits amount at present to about HK$1.7 trillion, out of a total balance sheet of HK$3.6 trillion.

But it ain’t so across the border.

There they are just playing games of self-delusion, none more so than the Chinese Academy of Social Sciences.

These supposed “valuable assets” are no savings at all.

China often reflects on its history – but it doesn’t look...

Everyone finally agrees China can’t be allowed to take over the...

When will a coronavirus vaccine be ready?

Google in China: When ‘Don’t Be Evil’ Met the Great Firewall

Is a China-Centric World Inevitable?

5 Bad Things in China’s Future (and 3 Good Ones)