China’s government spends millions of dollars each year to try to advance its views overseas, but this flood of cash has been met with setbacks, from the expulsion of Confucius Institutes at universities overseas, to student group tussles over speaking engagements for the Dalai Lama.

In recent months, Beijing’s “charm offensive” in the U.S. has come under increased scrutiny, especially investments in Hollywood, raising concerns the iron-fisted Communist Party is seeking to spread its own style of censorship and control.

But such fears, analysts argue, are largely overblown.

As China’s economic might expands and global influence grows, Beijing is looking to correct what it regards as inaccurate portrayals of itself. Chinese President Xi Jinping frequently talks about what he says is an effort to “tell China’s story well” – to tell its story on its own terms.

Beijing aims to portray China as “a civilization that is ancient, rich,” said Clayton Dube, director of the University of Southern California’s U.S.-China Institute.

“With China’s advanced economic strength, it’s been able to invest mightily in developing modern communication technologies, investing heavily in broadcast, investing heavily in internet, websites and news-gathering and these sorts of things, but also investing in the Confucius Institutes to try to increase American understanding of China,” he said.

Some of this is being done openly through state media broadcasts overseas such as China Central Television, recently rebranded as China Global Television Network, or CGTN. It also comes in the form of “advertorials” in leading American newspapers.

In other cases, covertly.

On campuses, there are Confucius Institutes, the more than 100 Chinese language and learning centers that have a growing physical presence at universities and institutes of higher learning in the United States. 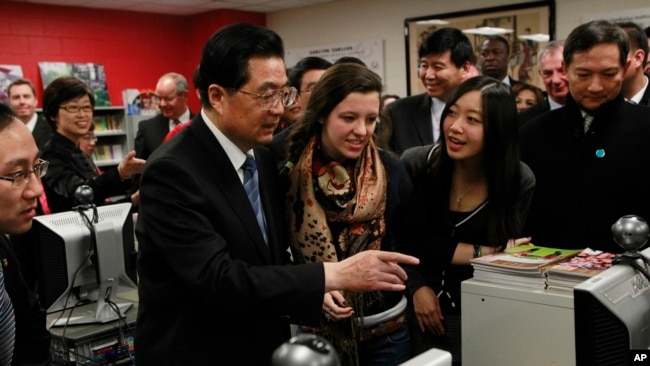 The centers claim to be a non-governmental organization, but administratively, its parent group falls under China’s Ministry of Education. And in recent years, several have been shut down over concerns about transparency and the impact they were having on academic freedom.

Philip Clart, Director of the University of Leipzig’s Confucius Institute and Professor of Chinese Studies at its Department of East Asian Studies, argues that when it comes to Confucius Institutes, they can be beneficial if handled correctly.

Clart said that while censorship and free speech issues remain a concern, these are not necessarily inherent to the program and can be avoided if there is a clear functional and institutional separation between the program and the university.

However, “if you are at a place where you don’t have an independent Chinese or Asian studies department, where the [Confucius Institutes] is brought to actually for the first time offer anything, any Chinese instruction, and there is no other voice, this becomes more difficult.”

Chinese student groups are also a growing force that at times are seen as forwarding the Communist Party’s agenda overseas. For example, when Tibet’s exiled spiritual leader the Dalai Lama was invited to speak at the University of California, San Diego in June, a group of Chinese students at the university launched a protest to stop his speech.

As the group rallied against the invitation, arguing strangely enough that the invitation to the Dalai Lama goes against “diversity” and “political correctness,” its connections to the local Chinese consulate were thrust into the limelight.

That incident and others highlight the difficulties Beijing faces and how the line between telling the China story well and spreading the Communist Party’s propaganda can easily blur.

A Reuters investigation in 2015 uncovered that more than a dozen stations across the United States were airing programming from state broadcaster China Radio International in the United States.

And while reaching an English speaking audience may be difficult, analysts note that the Communist Party has made major inroads when it comes to Chinese language media in the U.S.

While under the radar for most part, much of the landscape is Beijing-controlled or aligned. It targets mostly ethnic Chinese who may also be exposed to English coverage, but it shapes and in some ways limits the information they receive.

Ultimately, the goal for the Communist Party is for it “to be accepted as effective, legitimate and good,” said Robert Daly, director of the Kissinger Institute on China and the United States at the Woodrow Wilson Center. But selling one-party authoritarianism is a “pretty difficult pitch.”

“People listen to China, people know China is important, but they (Beijing) really don’t have a good story to tell that would convince Americans that one-party authoritarianism is, in fact, okay,” Daly said.

The biggest challenge of them all, however, is when “American architects of soft power cave in to Beijing for money,” said Daly.

This is most commonly seen in Hollywood, but also in publishing and even gaming. In some cases, content that might in some way be undesirable to Beijing gets scrapped to ensure access to China’s market.

“Because the size of the Chinese film market is so large, everybody wants a part of it. So everybody would like to have their films screened in China, if they have a chance,” Dube said. “And they know that certain films will not have a chance.”

Daly said this is what he calls “purchasing power times authoritarianism.” But it is the actions of Americans, and not Beijing, that he finds most troubling.

While some argue that more should be done to restrict China’s media access to the U.S. or even investments in Hollywood, others believe that more exposure leads to better understanding, Dube said.

China’s ready for war – against the U.S. if necessary

North Korea: US may impose sanctions on Chinese firms over ties...

Xi Jinping pushes China back towards strongman era, but is it...

Trump pulling out of the Paris climate agreement is great news...

Beijing is more worried about domestic issues than its trade war...

China sees cyber espionage as a ‘necessary’ part of its national...