SYDNEY, Australia — As the United States investigates Russia’s efforts to sway last year’s presidential election, Australia is engaged in a heated debate over how vulnerable its own political system is to foreign influence — and whether China is already meddling in it.

The issue was thrust to the forefront this week by a report that Australia’s intelligence chief had identified two prominent businessmen of Chinese descent, who have donated millions across the political spectrum in recent years, as possible agents for the Chinese government.

One of the donors is said to have withdrawn a large contribution last year because of a political party’s position on the disputed South China Sea, suggesting a back-room effort to shift public discussion of a delicate policy issue in Beijing’s favor.

The question of Chinese interference is a sensitive one for Australia, an American ally that has embraced Beijing as its largest trade partner and welcomed Chinese investors and immigrants in large numbers. The political establishment here has generally been reluctant to tackle the issue.

But the nation is now asking how a multicultural society should police a Communist power that has a record of mobilizing, and sometimes bullying, ethnic Chinese overseas to support its goals — and how it can do so without succumbing to racist xenophobia that treats everyone of Chinese descent as suspects.

China’s attempts to translate its economic might into political influence have caused unease in many countries. But the challenge is acute in Australia.

Many Australians view good ties with China as critical to their future prosperity, and Australia is an especially enticing target for Beijing because of its strategic value in the Pacific — and because foreign donations are both legal and difficult to track in its loose, opaque campaign finance system.

By contrast, such donations are largely banned in the United States, Canada and throughout most of Europe. 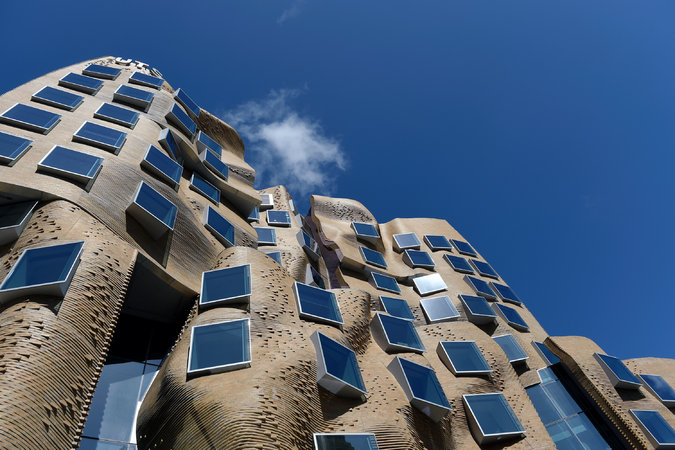 The Dr. Chau Chak Wing Building, on the University of Technology Sydney campus, is named after a Chinese billionaire property developer who gave $15 million to the school. Australia’s intelligence chief has identified Dr. Chau as a possible agent for the Chinese government. CreditPaul Miller/European Pressphoto Agency

“It’s not so much that China is more active but that Australia is more receptive in some respects and more vulnerable,” said John Fitzgerald, a professor at Swinburne University of Technology in Melbourne, Australia, who studies civil society in China.

Concern about the influence of Chinese money has been building for years and erupted again with new disclosures about the two businessmen, both billionaire property developers: Chau Chak Wing, an Australian citizen, and Huang Xiangmo, a resident who has applied for citizenship.

Duncan Lewis, the director of the Australian Security Intelligence Organization, warned leading political parties two years ago against accepting contributions from the men because of their ties to the Chinese government, according to a joint report by Fairfax Media newspapers and “Four Corners,” a current affairs television program.

But the Liberal Party and its governing coalition partners, as well as the opposition Labor Party, continued to take the money. The news organizations found that the men and their associates had made at least $5 million in political donations in Australia in recent years, including more than $820,000 since Mr. Lewis’s warning.

The most striking disclosure, though, revolves around a donation that did not occur. As a general election approached last year, Mr. Huang pledged to give an additional $300,000 to the Labor Party. But weeks before the vote, the report said, he rescinded the offer and made clear why: He was upset about a party official saying Australia should send naval patrols to challenge Beijing’s claims to the South China Sea.

The Pentagon has urged Australia to join it on such patrols, but the government has resisted.

On Tuesday, Prime Minister Malcolm Turnbull said he was preparing legislation to ban foreign political donations. “Just as modern China was based on an assertion of national sovereignty, so China should always respect the sovereignty of other nations, including our own,” he said.

But the broader problem may be the role of big money in Australian politics. Campaign financing is largely unregulated, with no limits on fund-raising, donations or spending, and critics say that has resulted in a culture of soft corruption that Chinese donors have learned to exploit alongside other corporate interests in Australia.

At the federal level, it takes seven to 19 months for the public to learn how much parties have raised and from whom, and donors are identified only if they have contributed more than 13,500 Australian dollars, or about $10,000. As a result, individuals, and corporations, can anonymously make multiple donations below that threshold. At the same time, Australian politicians are not required to explain what they do with the money.

“What we have is a thick shroud of secrecy regarding political donations at the federal level,” said Joo-Cheong Tham, an associate professor at Melbourne Law School. “I think that clearly gives rise to the perception, at the very least, of corruption and undue influence.”

Secretary of State Rex W. Tillerson hinted at Washington’s concern after meetings in Sydney on Monday. “We cannot allow China to use its economic power to buy its way out of other problems,” he said.

A report by the Australian Broadcasting Corporation last year concluded that businesses and individuals “with Chinese connections” had donated more than 5.5 million Australian dollars to the main political parties from 2013 to 2015, “making them easily the largest source of foreign-linked donations.”

But defining what a “Chinese connection” is and when it should matter is contentious. More than 4 percent of Australia’s population is of Chinese ancestry, and Chinese-Australians often confront suspicion when they invest or become involved in politics.

One of the donors flagged by Australian intelligence, Dr. Chau, immigrated decades ago. He has long maintained that his campaign contributions are benign and unrelated to the Chinese government. But his profile suggests close ties with the Chinese authorities, and his political contacts in Australia would enhance his stature in China.

His company, the Kingold Group, and its sprawling real estate empire are based in the southern Chinese city of Guangzhou. He also has invested in a newspaper there, linking him to the state propaganda apparatus, and is a member of a provincial body that advises the Communist Party.

The other donor, Mr. Huang, moved to Australia six years ago and leads the Australian Council for the Promotion of the Peaceful Reunification of China, which consistently promotes Beijing’s foreign policy positions, including its assertion that Taiwan is part of China and opposition to independence for Tibet. Though such views are common among Chinese, Mr. Huang’s fortune — the holdings of his Yuhu Group range from agriculture to malls — means his voice commands attention. 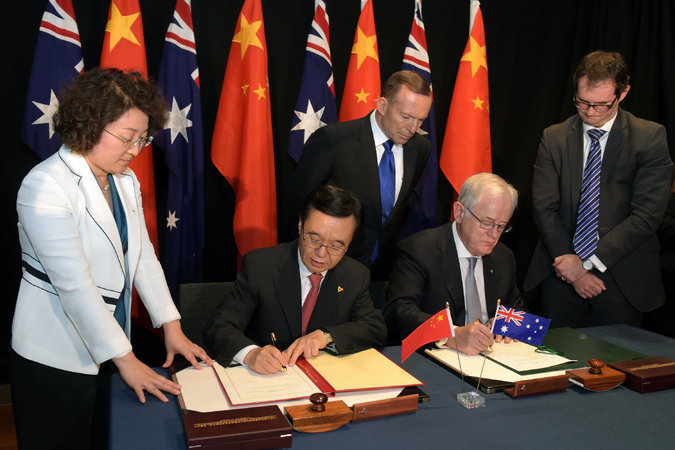 Andrew Robb, second from right, the trade minister at the time, signing a trade agreement with China in 2015. Mr. Robb was reported to have received a part-time consulting contract worth more than $650,000 a year from a Chinese billionaire. CreditLukas Coch/European Pressphoto Agency

In an editorial published in a state-run newspaper in China last year, he said coverage about Chinese contributions distorting Australian politics was racially biased. He added that Chinese in Australia had long been expected to pay tribute to politicians with donations but stay quiet on policy.

“The Chinese realize that they need to make their voices heard in the political circle so as to seek more interests for the Chinese,” he told reporters recently.

In a statement on Tuesday, though, he denied linking his donations to foreign policy. “I expect nothing in return,” he said. “While some seek to reinforce negative stereotypes about Chinese involvement in Australia, I am committed to more positive pursuits.”

Chen Yonglin, a former Chinese consular official in Australia who defected in 2005, said the donations disclosed so far were “very small compared to the transactions completed under the table,” including free trips to China and other gifts to politicians that can be impossible to track.

The uproar has focused attention on a revolving door in which politicians sometimes go to work for Chinese companies after leaving office. The former trade minister, Andrew Robb, who negotiated a trade pact with China, was reported to have received a part-time consulting contract worth more than $650,000 a year from a Chinese billionaire.

China’s growing leverage over academia has also come under scrutiny as universities have become increasingly dependent on tuition paid by Chinese students and, in some cases, donations from Chinese benefactors. The fear is that Beijing is using this leverage to stifle critical views.

Dr. Chau, for example, gave $15 million to the University of Technology Sydney for a building that bears his name, and Mr. Huang’s money helped establish the Australia-China Relations Institute at the university, overseen by a former foreign minister, Bob Carr.

Mr. Carr argues that the institute is independent of Beijing’s influence. But Feng Chongyi, a professor at the university who has criticized the Communist Party’s suppression of dissent, said the institute had repeatedly brushed off his efforts to get involved.

Professor Feng said Australia must decide whether money or values defined its politics. “The question is whether you’re willing to make sacrifices to fight these illiberal tendencies,” he said, in his tiny office near the gleaming Dr. Chau Chak Wing Building on campus. “If you don’t maintain your core values, it’s all just business.”

The Real China Problem the World Is Ignoring

Everyone warns of China’s rise. But its decline could be even...

Why is China blurring the line between party and state?

On Politics and Government

5 Bad Things in China’s Future (and 3 Good Ones)