China launched its newest warship on Wednesday, a large guided-missile destroyer touted as the latest in naval technology and seen as a challenge to naval rivals in Asia.

The ship, dubbed the Type 055 class, represents a big step in the country’s military modernization, Chinese government websites pointed out.
“It is the symbol of the navy to achieve strategic transformation development,” the People’s Liberation Army Navy website said.
The 10,000-ton destroyer has been developed entirely in China, and it breaks new ground for the country in the design and assembly of large naval vessels, according to the PLA Navy website. The armaments are also new for the Chinese navy.
“The destroyer is equipped with new type of air defense, anti-missile, anti-ship and anti-submarine warfare weapon,” according to the website.
The new ship is comparable in size to the latest destroyers fielded in Asian waters by the United States, Japan and South Korea, analysts have said.
Indian media reports have raised alarms over the launch, pointing out the destroyer is superior to any ship yet completed by the Indian Navy.
“The colossal Type 055 is considerably larger and more powerful than India’s latest … destroyers which have still not been commissioned,” a report on NDTV said.

The Type 055 will weigh 13,000 tons when fully fitted out with its weapon systems and commissioned, making it the country’s largest destroyer, Li Jie, a researcher with the PLA Naval Military Academic Research Institute, said in a February article on the PLA’s website. 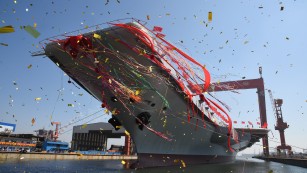 The only aircraft carrier built in China 00:40
The Type 055 will be a central part of future Chinese aircraft carrier battle groups, Li said in the article.
“Type 055 guided-missile destroyer carries medium-long-range and medium-short range air-defense missiles, which can significantly improve its overall air defense capability,” he said. “It also has a strong anti-submarine capability, so it is much more able to protect aircraft carrier battle group than the Type-052D destroyer currently in service.”
The new warship will have more than 100 vertical launch tubes for missiles with the ability to strike targets 1,000 to 2,000 kilometers away, according to the PLA report.
China’s current Type 052 destroyers carry only 64 missiles, analysts have said.
The Type 055 also features stealth characteristics, the PLA post said, including a small radar cross section and low noise, infrared and electromagnetic radiation.

The Type 055 appears akin to the US Navy’s Arleigh Burke-class destroyers, which debuted in the 1980s and carry 96 missiles each, military analyst Kyle Mizokami wrote last year in Popular Mechanics. 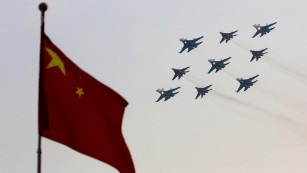 China’s modest military spending hike masks bigger goals
India, which sees China’s ambitions for a blue-water navy as a threat in the Indian Ocean, noted Wednesday that China’s Type 055 already outguns Indian vessels that are still being built, the NDTV.com report said.
The new Indian destroyers will be at least 2,000 tons lighter than the Chinese ship and will carry fewer than half the missiles of the Type 055.
The Type 055 will undergo “equipment debugging” as it prepares to join the fleet, Chinese government websites said, without giving a target date.
By Brad Lendon, CNN

Trump Is Throwing China Off Balance – That May Not Be...

Exploring the Unique Challenges of a Rising China with Author Martin...

The Guardian view on the Vatican and China: an ideological struggle

China has defied the rules with impunity

How to gauge China’s development in its ethnic minority regions? Watch...

It’s time for the US and Europe to ask what sort...