Chinese warships will join Vladimir Putin’s navy in the Baltic Sea on Friday ahead of war games which are being watched closely by Western powers.

The drills, which are a sign of both the growing reach of the Chinesemilitary and closer strategic ties between Moscow and Beijing, kick off a busy summer of drills by Russia in eastern Europe which have raised alarm in Washington.

China’s most advanced guided-missile destroyers are expected to arrive in the Russian enclave of Kalingrad on Friday before taking to the seas with a Russian flotilla on Monday for exercises that will run until July 31.

The Changsha was described as China’s “most advanced guided-missile destroyer” by Chinese media, while the Yuncheng is also believed to be among the most capable frigates in the People Liberation Army (PLA) Navy’s arsenal.

“By sending its most advanced guided-missile destroyers, China is expressing its sincerity to Russia and also sends a strong signal to other countries who plan to provoke us,” Li Jie, a Beijing-based navy expert, told the state-run Global Times.

While China has dispatched some of its most high-end warships to the joint exercise, the continent from Russia’s Baltic fleet is much smaller. Just two combat ships – new corvettes of the Steregushchy class – will be joined by a support tug, naval Ka-27 helicopters and land-based Su-24 fighter-bombers as air support.

The exercise will run the course of a week, and will feature anti-submarine, anti-aircraft, and anti-ship drills. The two sides will also practice anti-piracy as well as search and rescue operations. The joint flotilla is under the command of Russian Vice Admiral Alexander Fedotenkov and Chinese Vice-Admiral Tian Zhong.

The drills are being conducted in Russian, according to the Baltic Fleet’s press service.

China has been expanding its military reach by building up its naval forces and establishing its first overseas military base in the tiny east African nation of Djibouti this year.

The manoeuvres in the Baltic Sea are being seen by Chinese experts as a show of force following joint drills by the United States and Beijing’s two key Asian rivals – India and Japan – in the Indian Ocean earlier this month.

Observers also say they are directed at Nato, and underscore China’s aspirations to be a major blue sea power and a rival to US naval might.

A statement from the United States European command said: “We are closely tracking Russian exercises with other participants, like China.

“While we support their rights to train in international commons, we expect all nations adhere to international norms and laws,” the statement added, according the the Stars and stripes military news website.

Wei Dongxu, a Beijing based military expert, said that Britain would feel a loss of prestige over the Chinese drills, given its history as a maritime power.

“If you look back 30 years ago, there was no way that Britain could have imagined China could dispatch such advanced warships to carry out these activities,” he told The Telegraph.

“I expect China will have overwhelming advantage over Britain on naval strength.”

A named commentary in the Global Times on Friday that the drills are part of a wider plan of “enhancing (China’s) presence in oceans around the world”.

“China should not back down from its current stance in the face of criticism from NATO countries,” said the commentary, from Cui Heng. a PhD candidate at the Center for Russian Studies, East China Normal University.

“An appropriate entry into the NATO countries’ “backyard” like the Atlantic, the Mediterranean and the Baltic Sea will reflect China’s confidence and strength.”

Meanwhile, concerns have been raised by the US military over Russian war games in Belarus – an ally of Moscow – in September.

Some NATO allies believe the Russian exercise could number more than 100,000 troops and involve nuclear weapons training, the biggest such exercise since 2013.

US Army Lieutenant General Ben Hodges, who heads US Army forces in Europe, told Reuters that allies are also concerned that the manouvres could be a “Trojan horse”, in which Russia would leave equipment behind. 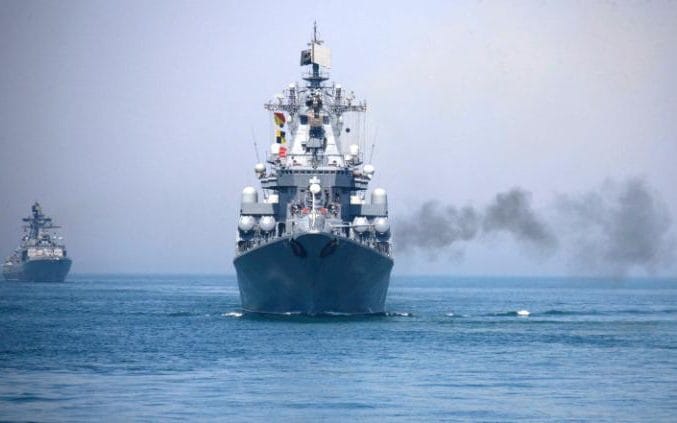 Is this Trump’s last UN speech, or the last of the UN?

China has told us how they see their place in the world. The question is, can we live with it?

‘Chairman Xi’ seeks only to purge and subjugate. That is his...

China Is Reluctant to Blame North Korea, Its Ally, for Cyberattack

In China, investigations and purges become the new normal

How China could make Trump miserable

North Korean missile launch pits China and Russia against the US