The U.S. government may soon impose tariffs on nearly all goods exported from China. There is no agreed justification for this policy: Some, such as Treasury Secretary Steven Mnuchin, say the goal is to open Chinese markets and ultimately increase trade, while others, including the U.S. Trade Representative, say the tariffs are meant to punish intellectual property theft.

The most compelling justification for the tariffs, however, is that they will “wean” Americans from Chinese productive capacity. From this perspective, the goal isn’t expanded or “fair” trade, but the “disengagement” of incompatible economic systems. This separation would be costly. The question is whether it would ultimately be worthwhile.

In Pakistan, China and the U.S. are clashing over China’s One Belt, One Road initiative. To understand what’s at stake, it helps to take a look at why China is in Pakistan in the first place.

First, consider the costs. Tariffs are taxes paid by residents when they buy goods from foreign countries. Like other taxes, tariffs distort economic activity and reduce the real spending power of consumers. Total imports from China amount to less than 3% of U.S. gross domestic product. The direct impact of adding a 25% tax to those imports would therefore be noticeable, but not particularly large, especially when compared with the recent tax cuts and federal spending increases.

The much bigger cost would come from the broader implications of winding down the bilateral trade relationship. Since 1990, U.S. companies have invested more than $250 billion in China to make goods both for the growing Chinese market and the rest of the world. Economic disengagement would mean writing off much of those investments and taking the time and money to build new capacity elsewhere.

Despite these clear dangers, there are some positive arguments in favor of a “conscious uncoupling” of the U.S. and Chinese economies, as the economist Christopher Balding has put it.

The simplest is that the U.S. would merely be matching what the Chinese government is already doing. China has been reducing its reliance on imports since the mid-2000s. Its “Made in China 2025” industrial strategy is explicitly aimed at replacing the few manufactured goods it still imports with domestic substitutes—an act of aggression against the U.S. economy. The Chinese government says it must move from sweatshirts to semiconductors to become a rich country. Unstated, but at least as important, is the Chinese government’s desire to become independent from suppliers of critical goods based in the U.S., Japan, and Europe, which are considered politically hostile. 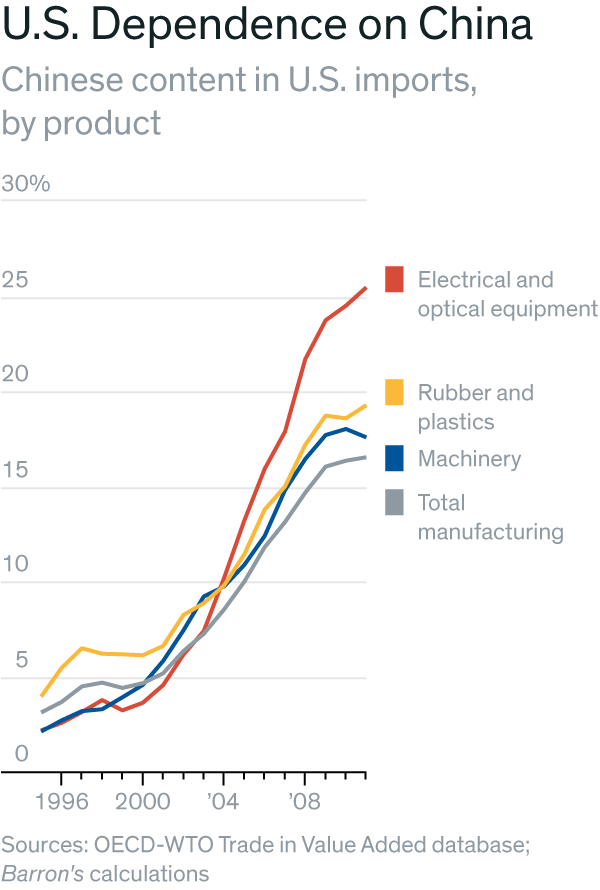 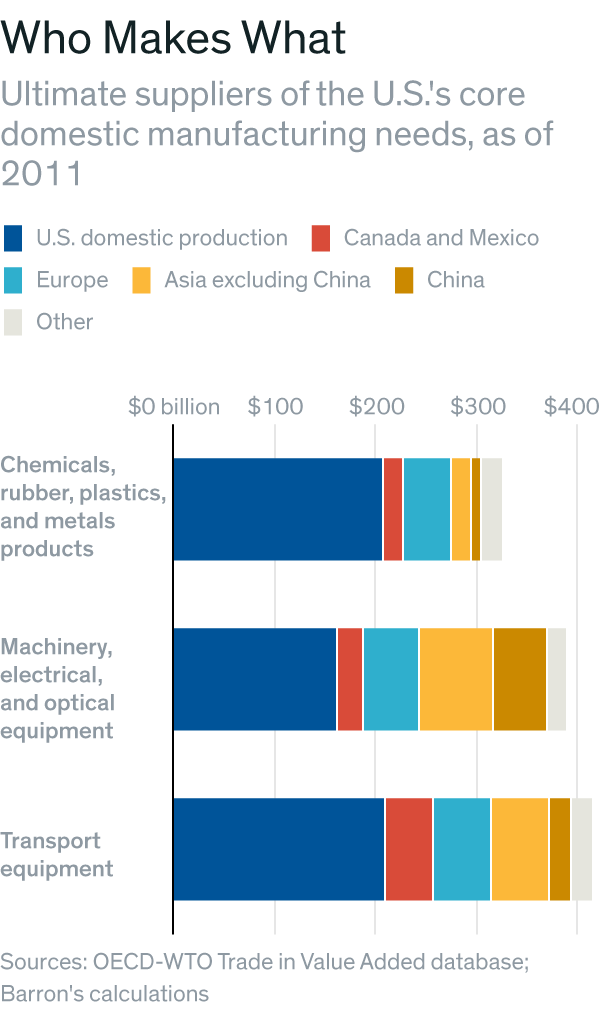 By that logic, the U.S. has at least as much justification as China for taking extraordinary measures to restore its economic self-reliance. At first blush, this might seem surprising: Only about 14% of America’s total domestic needs are ultimately satisfied by foreigners, and Chinese producers satisfy just 2% of American domestic demand. The U.S. is self-sufficient in food and almost self-sufficient in energy, and remains one of the world’s biggest manufacturers. Yet in specific product categories, the U.S. has become increasingly dependent on Chinese production to meet domestic needs.

The value of Chinese manufacturing exports has been rising rapidly as a share of total U.S. imports (see chart). As of 2011—the latest year for which we have comprehensive data—more than a quarter of the value of U.S. imports of “electrical and optical equipment” came from China, compared with just 4% in 2000. Similar rapid growth can be seen in other important product categories. Part of the reason is that Chinese companies are increasingly sourcing their components from Chinese suppliers. With rare exceptions, the popular narrative that Chinese workers and businesses merely assemble parts made elsewhere is out of date.

At the same time, more and more U.S. domestic demand is satisfied by imports. U.S. production only covers about half of America’s needs for high-value manufactured goods. The proportion of capital goods produced thousands of miles away across oceans could be considered hazardous from the perspective of national security (see chart). Relocating some of America’s manufacturing supply away from a potential military adversary could be prudent—or it could precipitate precisely the kind of hostile reaction it was meant to protect against.

Others think the American and Chinese systems should “disengage” because they are too different and too big to interact without creating conflict. While China has an innovative and competitive private sector, and the U.S. is often plagued by cronyism and state direction, these commonalities are far smaller than the differences.

Dani Rodrik, a Harvard economist and the author of Straight Talk on Trade: Ideas for a Sane World Economy, has argued that the world trade system should become flexible enough to accommodate “divergent economic strategies” and that governments should have the option to “privilege [domestic] concerns over imports and foreign investment.” Perhaps mutually-agreed reductions in U.S.-China trade would be preferable to endless arguments about “cheating” and market access and “stealing jobs.” This seems like a distant second-best to Chinese reforms that would benefit regular Chinese people, but it could be more practical than waiting for the Communist Party to relinquish its control of the economy’s commanding heights.

“Disengagement” has some appeal. Unfortunately, even if the future benefits were worth the upfront costs, doing it successfully would require far more strategic focus and policy competence than has been demonstrated thus far.

Could There Be Another Chinese Revolution?

Xi Jinping pushes China back towards strongman era, but is it...

Donald Trump must not take his eye off China