Whether dealing with foreign policy, trade, unemployment, or property prices, he declared, officials would be held responsible if they slipped up and let dangers spiral into real threats.

“Globally, sources of turmoil and points of risk are multiplying,” he told the gathering in January at the Central Party School. At home, he added, “the party is at risk from indolence, incompetence and of becoming divorced from the public.”

The speech was one of Mr. Xi’s starkest warnings since he came to power in 2012, and has been echoed at hundreds of local party meetings nationwide.

It underscores how slowing growth and China’s grinding trade fight with the United States have magnified the party leadership’s chronic fears of social unrest. Trade talks in Washington between American and Chinese officials ended last week without an official agreement, although President Trump delayed a deadline to increase tariffs on Chinese goods, saying that negotiators were making progress.

“Beijing is confronting significant pressure from the international community over its political and business practices that only adds to its difficulties in dealing with its domestic issues,” said Elizabeth C. Economy, a senior fellow at the Council on Foreign Relations in New York who wrote “The Third Revolution,” a study of Mr. Xi.

There are no political challengers on the horizon who could pose an immediate threat to the Communist Party or Mr. Xi. But his remarks made clear that especially in 2019 — a year of politically sensitive anniversaries — the party would aggressively extinguish sparks that could ignite protests and turbulence. 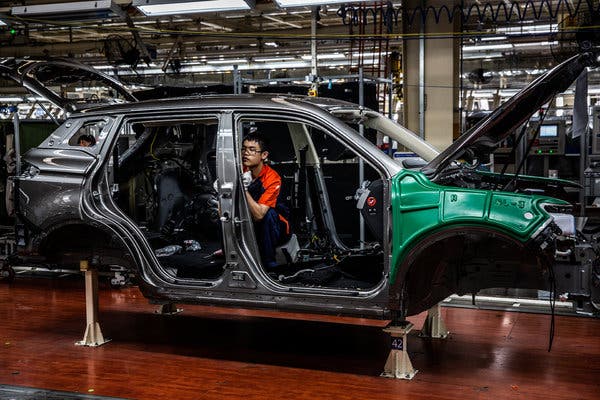 A year ago, Mr. Xi triumphed at China’s national legislature, abolishing a term limit on his presidency, opening the way for another decade or longer as both president and party leader, and shaking up the government to become a more compliant tool of party power.

A year on, though, Mr. Xi’s speech and other official warnings show that triumphalism has receded. Mr. Xi also appeared keen to signal that if anything goes wrong, other officials will also shoulder responsibility, said several experts.

“It was about showing that the risks aren’t borne by just Xi Jinping, but go down to other members of the Politburo Standing Committee and down again from there,” said Wu Qiang, a political analyst in Beijing.

Mr. Xi’s warnings were more wide-ranging than his previous repeated calls about risk, experts said, and his defensiveness is likely to constrain policy changes this year. Even though President Trump’s negotiators want China to take big steps in reducing state controls on the economy, Mr. Xi appears to be in no mood for gambles, Mr. Wu said.

“The central leadership’s assessment of risks to China has officially expanded from the economy to every sphere,” Mr. Wu said. “This year will put policing and security to the forefront.”

The timing of the meeting was designed to reinforce Mr. Xi’s message, according to an online article from People’s Daily, the Communist Party’s official news outlet, noting that local legislatures’ scheduled meetings were forced to make way for it.

Mr. Xi made clear that the economy was a major concern, telling officials to beware of “black swans” and “gray rhinos” — investor jargon for surprise economic shocks and financial risks hiding in plain sight.

But Mr. Xi identified dangers that extended far beyond the economy, especially political risks like the party’s ability to keep young Chinese from slipping from its ideological orbit.

He demanded stricter controls on the Chinese internet — which is already thoroughly censored — and more indoctrination to “ensure that the youth generation become builders and inheritors of socialism.”

“Younger officials must go in guns blazing to take on these major struggles,” Mr. Xi told the officials, seated in rows like students taking notes.

Yet Mr. Xi’s demands for unyielding stability could backfire, experts say, as warnings of danger around every turn could smother the initiative and flexibility that Chinese officials need to defuse long-term economic and social dangers.

The demands for rigid order on so many fronts put local cadres in near impossible binds, they said: trying to prevent job losses while cutting debt and shutting inefficient “zombie” businesses; trying to buoy private investment while cracking down on pollution and bank credit; and proclaiming public confidence in the government while stifling complaints from the public.

“If everything is a risk, you can end up mitigating nothing,” said Jude Blanchette, an expert on Chinese policymaking at Crumpton Group in Virginia, which advises companies on investments.

China’s jumpiness can seem far-fetched, given the Communist Party’s daunting reach, the underlying strength of the economy and the extensive powers of the domestic security services.

But anxiety seems to run deep in Mr. Xi’s veins.

He is the son of a revered Communist revolutionary, and since coming to power he has hinted at worry that party power could easily slip away. Soon after taking office, he said that the Soviet Union had fallen apart because Mikhail S. Gorbachev failed to lead like a “real man.”

Since Mr. Xi, 65, abolished the term limit on his presidency last year, murmurs of discontent have risen among academics, businesspeople and former officials, despite censorship and the security police.

Chinese leaders’ worries have been magnified by what party journals warn is an increasingly hostile bloc of Western governments, led by the United States, that have pushed back against Chinese high-tech acquisitions, propaganda influence and the mass detentions in Xinjiang.

This year especially, Chinese officials worry that sensitive anniversaries could act as kindling, according to directives issued by local governments. It is 30 years since student protests for democratic change filled Beijing and other Chinese cities, ending in a bloody armed crackdown around Tiananmen Square that began late on June 3, 1989.

It is also 100 years since the watershed “May 4” patriotic student protests of 1919, 60 years since a failed uprising against Chinese rule in Tibet and 10 years since ethnic riots killed hundreds in Xinjiang, the western region where hundreds of thousands of Uighur Muslims have been detained in indoctrination camps.

The government is also preparing grand celebrations in October to commemorate 70 years since Mao founded the People’s Republic of China.

Since the January meeting, provinces, cities and towns have rolled out or freshened up plans to monitor and contain dangers. Officials from Hunan Province, for example, vowed to beat back debt owed by state-linked companies. Liu Jiayi, the party chief of Shandong Province in the east, also called for dealing with discontented former soldiersdemanding better welfare.

Local governments have warned the police to redouble their vigilance against protests ahead of the “sensitive anniversary dates.” Small protests by Marxist students supporting striking workers in 2018 already resulted in detentions and warnings on university campuses in Beijing.

“Prevent social and economic risks evolving into political risks,” Chen Yixin, the secretary-general of the party’s law and order committee, said late last month. With the internet, he said, “a small incident can form into a vortex of public opinion.”

editor - January 3, 2019
0
China is a relative late-bloomer when it comes to the world of space exploration. But just 15 years after it first sent an astronaut into...